February 2019 I was asked by my yoga teacher to join her in a Costa Rica seven day yoga retreat. At this point in my yoga cello experience I was only playing for the local class. Just to give you a little history on the yoga cello experience for me this far. I started playing for Savanas during the class. It lead into me starting the class with cello music for meditation and ending with cello for savanas. So when Rita Grant my yoga instructor asked me to join the retreat as part of the staff, I was elated! My first trip out of the country with my cello.
When we arrived at the leaves and lizards resort, I did not know what to expect. The yoga studio was an outside studio set in the middle of a horse farm. As we practiced yoga we were surrounded by beautiful scenery and horses grazing! I would get to play here! The first class was amazing and each day after that got even better. I didn’t have my looper pedal so I was just solo cello. The sound and feeling that came to me was incredible! I sometimes was not even sure what I had played because the beauty of the atmosphere just came out of me in the music!
In the middle of the week the owner of the resort had arranged for the group of women on this retreat to go into the community and cook a meal for the community center. Then the Debbie the owner of Leaves and Lizards told me that she had advertised that a cellist was going to provide a concert during the meal. I had prepared to play for the group but was not expecting an audience of over 100 towns people. I had prepared the 1st suite of Bach to play.
That morning we prepared and cooked with the Costa Rician women. We couldn’t speak spanish but we were able to communicate through signs. It was so fun!
Then I went to the resort to get ready for my presentation of music. I was not feeling as nervous as I thought I would. The atmosphere in Costa Rica was that or Pura Vida. Slow down and enjoy!
When I sat to start playing I took a deep breath and just started in. I spoke to the crowd first and explained my instrument and what I was going to play. I thought playing Bach was appropriate because Pablo Casals had first played the Bach suites and he was spanish.
The event was one of the most inspiring days of my life. I try to hold on to that feeling all the time.
Pura Vida! 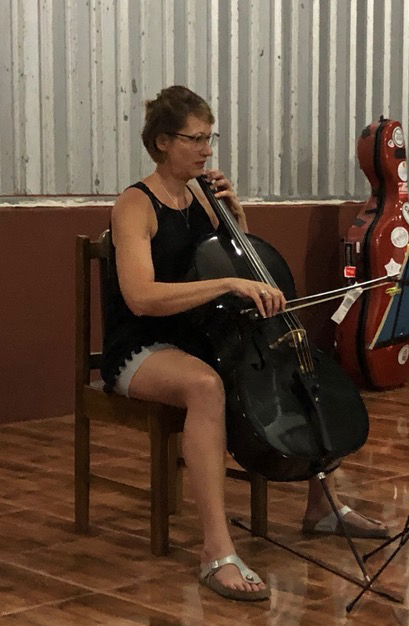